In coming decades, the population of the United States and the state of South Carolina is projected 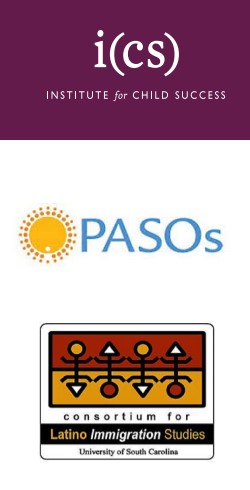 to evolve into a highly diverse young population contrasting a largely non-Hispanic white older population. Considering this demographic shift and in order to ensure the well-being of the nation in the future, the growing Hispanic population must be taken into account as new policies are developed. Special attention must be focused on early childhood policies surrounding Hispanic children with a specific focus on the areas in which they currently lag behind other racial and ethnic groups. This month, ICS released a report “The Current State of Young Hispanic Children in South Carolina: Projections and Implications for the Future” in conjunction with the Consortium for Latino Immigration Studies and the PASOs Programs at the Arnold School of Public Health, University of South Carolina. This report is a compilation of recent data, and its implications, from the United States and South Carolina regarding various aspects of young Hispanic children and their families, in addition to recommendations for decision makers.

Helping more children, parents get the ‘basics’ (and beyond): More from the ICS Research Symposium

How can educators, health leaders and communities help more parents learn to work with their…

Leaders weigh issues around ‘Race, Justice and the Young Child’

They gathered in an unlikely location, the former Middleton Place plantation in Charleston, S.C., in…

With support from the Social Innovation Fund, the Institute for Child Success (ICS) has worked…