States demonstrated a commitment to providing education to young children in the 2014-2015 budget year, according to a new report from the Education Commission of the States. Their annual funding report, which compares state funding for pre-K programs based on budgets from year to year, found that 32 states and D.C. increased their investments in pre-K, with a 12 percent increase in funding amounts nationwide.

The picture, of course, looks very different in different states. Arizona’s spending increased 116% from the 14-15 budget year to 15-16 on its Quality First Scholarships, while Alaska had the greatest funding decrease, cutting nearly 17% off of an already lean pre-K budget.

We see this in the states where ICS is currently active on a variety of early childhood projects; as the table below shows, there are no trends across states in how pre-K has fared, with a significant increase in Washington occurring at the same time that New Hampshire has a continued lack of state funding earmarked specifically for pre-K. While recent federal efforts, including the newly passed Every Student Succeeds Act, suggest a focus on early childhood, pre-K offerings remain the domain of individual states – a situation which leaves an important component of a child’s life up to the chance of geography.

One new measure included in this report was highlighting the states with the top per-child spending amount, based on the number of preschool-aged children in the state. This doesn’t reflect how much is actually spent per child enrolled, but rather is an interesting approach to gauging a state’s commitment to funding the program both at an appropriate level as well as reach a large number of children. We’ve compared these figures with the per-child spending figures that come from the annual report of the National Institute for Early Education Research (NIEER), which show actual spending for each child enrolled. 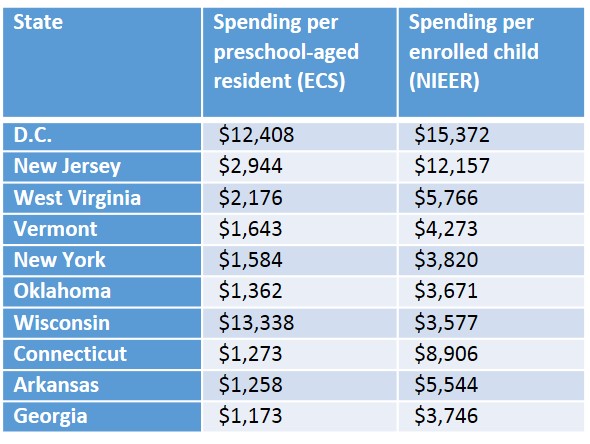 These two figures paint a complex picture. The NIEER figures show that some states put significant funding into their pre-K programs per-child, which is generally linked to higher standards and longer program days. The ECS figures show that these funding amounts would be spread quite if they were divided among all children in the state. If a state has very different amounts on these two measures, it indicates that many children are not receiving state pre-K. My home state of New Jersey, for example, has been heralded for its high-quality pre-K program, but restricts enrollment just to a handful of the neediest school districts. The best intended state pre-K efforts miss a significant number of children and families who could benefit.

State budgets are complicated, and good marks in the ECS report does not mean that the battle is over for pre-K programs. It is not uncommon for states to earmark funds for pre-K in their budgets, but later reduce funding amounts during the year as other budget priorities come into play – this is why there is often a difference between ECS and NIEER funding figures. Pennsylvania could not even be included in the ECS report since a state budget has not been passed, leaving families in the state uncertain of the fate of their children’s programs.

And pre-K cannot stand alone. ICS is committed to systems-level changes to improve the lives of children, which requires investments both before and after the preschool years. A new report from the National Center for Education Statistics found the K-12 spending is still struggling from the recession, creating concern that students may not get the supports they deserve in the early elementary grades. States must commit themselves in investing in their future leaders at every level of education.

Child Care Staffing a Major Challenge in South Carolina as Providers Do More with Less
"Staff childcare workers want some type of Health Benefits to be issued and affordable for ALL childcare workers also like State health plan, Teachers Benefits. Childcare workers are needed just as much and often as other workers. People can't go to work without childcare needs. So, WE must open and be here daily no matter what pandemic is going on. WE ARE FRONT LINE WORKERS ALSO!!”
September 2020 eNews

Anti-racism and Our Children’s Future
A racial awakening occurred in summer 2020 that has seen communities wrestle with a reckoning that, at this moment, feels unprecedented. We, at ICS, acknowledge that this moment is centuries overdue.