The National Institute for Early Education Research (NIEER) recently released its annual State of Preschool report. The “Yearbook” as it’s called is derived from an annual survey of state-funded pre-K programs on topics including access, resources, and quality standards. The report itself covers not only national trends, but provides state-level analysis and rankings to help policymakers and parents gauge the progress of early childhood education.

The national level findings reflect a field in flux as the profile of early childhood increases while states still struggle to recover from the recession.

While the national picture may indicate slow recovery, geographic differences can be devastating to the opportunities for preschoolers. As the map shows below, 10 state did not offer services for the full 2013-2014 year, though several of these states have since begun investing in new programs. The South has traditionally been a strong region for providing early childhood education, a position that will be strengthened by Mississippi’s new investment which began midway through the 2013-2014 school year. However, not all states are the same: 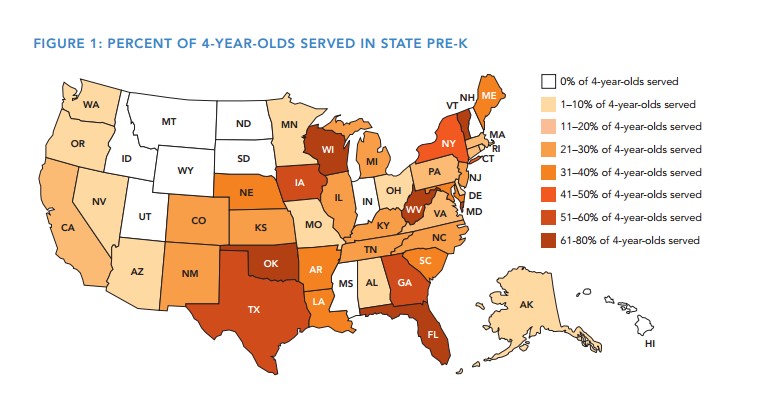 Clearly, there are large differences in enrollment levels throughout the region. ICS’ home state, South Carolina, ranks 11th for serving 4-year-olds, serving 39 percent of that population; it also enrolls 11 percent of 3-year-olds, also ranking 11th nationwide. However, access only begins to tell the story. The Palmetto State ranks last of all state’s providing pre-K for its spending per-child, with reported amounts of only $1,817 from state sources for each child enrolled across 4K and the Child Development Education Pilot Program (CDEPP) programs. While CDEPP met 7 of NIEER’s 10 quality standards benchmarks, 4K, which serves more than twice as many children, meets just 5. We’ve written previously about the need to invest more in 4K to ensure that children served start life with their best foot forward. While the Yearbook focuses primarily on state-funded pre-K, it also offers information on Head Start and special education enrollment;

Before joining ICS earlier this year, I was the project manager on this report. It is an incredibly rich data source for understanding how states were investing in the most recent 2013-2014 school year, and in understanding how they have progressed since 2001. The Yearbook helps policymakers develop a roadmap for where we are and where we need to go to ensure that our nation’s youngest learners receive the opportunities they need. If you’re interested in learning more about a state’s progress, check out the state profiles; for more detailed information to compare state policies, Appendix A has the full data set collected in the survey.

Anti-racism and Our Children’s Future
A racial awakening occurred in summer 2020 that has seen communities wrestle with a reckoning that, at this moment, feels unprecedented. We, at ICS, acknowledge that this moment is centuries overdue.
Back to School During COVID-19 Pandemic: Preparation Steps to Keep in Touch with Students
Yet, anticipating that many schools will choose virtual schooling at some point this coming academic year, an issue arose from last school year unique to that practice: specifically, students and teachers losing contact with one another.