It is easy, sometimes, for cities to dominate the conversation on education policy in America, especially in the world of early childhood. In recent years, we have seen major preschool initiatives as central policy issues from New York to Seattle and in between. Cities, with their high student populations and larger pools of potential teachers, are an easy poster child for early childhood innovation. 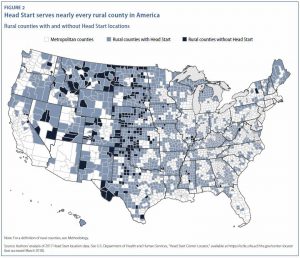 Image used with permission from the Center for American Progress. For more details, please see the full report.

But a new report from the Center for American Progress makes clear what residents outside cities have known for years – the unique needs of families in rural communities are a tough fit for early childhood services. Low population density can complicate the already razor thin margin on which many child care centers operate; large service areas for school districts introduce the potential for high transportation costs; and rural communities continue their attempts to recruit and retain highly qualified teachers. In these communities, Head Start is – and has been – a pillar of local communities, providing essential education services as well as resources for the whole family.

According to the new report, which uses information from Head Start’s Program Information Reports combined with U.S. Department of Agriculture data on rural areas, found:

Head Start has never been focused solely on the education of the child; as one of America’s first “two-generation” programs, it has always had a focus on community connections and referrals for the children it serves as well as their families. This role is particularly acute in rural counties. The report found that rural Head Start programs were moving the needle for access to medical care, even in counties designated as Health Professional Shortage Areas (HPSAs). Children entering rural Head Start centers were less likely than their Head Start peers in metropolitan areas to be up to date on preventative care visits; immunizations; and have had access to continuous dental care. However, program information reports indicate that these rural centers were increasing these rates by the end of the year at about the same rate as in metropolitan locations. Head Start centers play an essential role in connecting these students with the health services they nee to thrive, overcoming medical provider shortages and leverage community resources.

Head Start plays a critical role in many communities across the country. An ICS analysis of the 2013-2014 year found that more than 270,000 children in the South  – about one-third of the total program enrollment nationwide – were served by the program. Head Start programs in the South were more likely to offer full-day programs, 5 days per week, than the national average, serving the needs of families. ICS has also previously examined the complex issues related to early childhood partnership in rural areas, contributing to the Rural Trust’s Why Rural Matters report.

The CAP report is much-needed spotlight on the challenges rural families face to address their early education needs and, we hope, a jumpstart to this important national conversation.

Child Care Staffing a Major Challenge in South Carolina as Providers Do More with Less
"Staff childcare workers want some type of Health Benefits to be issued and affordable for ALL childcare workers also like State health plan, Teachers Benefits. Childcare workers are needed just as much and often as other workers. People can't go to work without childcare needs. So, WE must open and be here daily no matter what pandemic is going on. WE ARE FRONT LINE WORKERS ALSO!!”
COVID-19 Impacts Different Child Care Settings Differently and More Assistance is Needed