In the less than ten years since it arrived on the American social policy scene, Pay for Success financing has helped finance 24 U.S. projects, including 7 focused on early childhood programs (as of this month). These projects have used innovative outcome-based financing to bring new resources to early childhood education pr

ograms, prenatal and newborn home-visiting, and child welfare programs. In a new paper, we turn our attention to another underfunded area of early childhood development and ask: how can PFS be used to expand and improve services for young children with disabilities?

grade less often; and, in some cases performing similarly to typically developing classmates years after intervention.

Two Preschool PFS projects in the U.S. – in Chicago and in 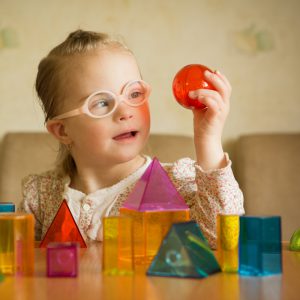 Salt Lake County, Utah -currently include reduction in the need for later special education services as an outcome. One of the most common concerns about special education placement as a payment outcome is that there could be an incentive to deny children access to services to which they are legally entitled in order to “game” the results. It is understandable for advocates to question any initiative that may threaten the due gains they have fought long and hard to provide for students. During the development of Pay for Success projects, safeguards are built in to address these concerns.  A summary of these projects, including an update on their results, as well as a discussion of the need for safeguards is included in the paper.

While the federal Individuals with Disabilities Education Act (IDEA) creates funding mechanisms to aid states in the provision of special education services, it does not cover the full cost of special education. The implementations of those services vary dramatically across states and school districts. States and local districts, as well as funding sources such as Medicaid, bridge the gap between the funding from IDEA and what is needed to fully serve children. In this paper, we explore several opportunities to move beyond just considering special education placement as an outcome metric and consider how PFS financing could be used to expand and improve service provision for children with disabilities, including:

Since PFS is still in its early stage of development, the early intervention and early childhood special education worlds have an opportunity to shape these projects to be inclusive and target services towards children with disabilities. At the federal level, the Office of Special Education Programs (OSEP) at the Department of Education is working with its OSEP-funded early childhood technical assistance centers (ECTA and DaSy) to build capacity among state coordinators in IDEA Part C Early Intervention and Part B Preschool to explore the potential of PFS.

Transparency is important to the process, as is understanding how implementing a PFS project may impact other early childhood efforts in the area. The Department of Education required that applicants to their recent PFS preschool feasibility grant program include a plan for stakeholder engagement, particularly outreach to and involvement of the representatives from the State and local special education community or individuals with special education expertise, including groups representing families”.[1] Particularly given new opportunities for PFS in early childhood passed in the most recent federal budget, our new paper is offered in the same spirit of transparency – not to lay out a roadmap for the future of the field but to begin a robust conversation on how we can make PFS work for special education.

Sean Rusnak, Post-Baccalaureate Fellow This blog is part of ICS’s series utilizing information from our…

As I leave South Carolina (and return to the UK) following a very productive three-month stay in which I presented in Columbia, Charleston, and Spartanburg to early childhood educators, students and other professionals and agencies involved in Early Childhood, I want to analyze the outcomes of these various sessions and try to find common denominators and highlight issues and challenges which have a recurring theme.
This Post Has 0 Comments