“We set out to make certain that poverty’s children would not be forevermore poverty’s captives. We called our program Project Head Start. The program was conceived not so much as a Federal effort but really as a neighborhood effort, and the response we have received from the neighborhoods and the communities has been most stirring and the most enthusiastic of any peacetime program that I can remember.”

President Lyndon Johnson shared these words, 50 years ago today, at the Rose Garden signing heralding the creation of the Head Start program. The program has changed tremendously in its 5 decades, from a summer-only intervention serving 561,000 children to serving over 900,000 children in 2014. Throughout this time, it has remained a program committed to not only building school readiness for young children, but also addressing the needs of the whole child through health and developmental screenings, nutrition, and family and community engagement. 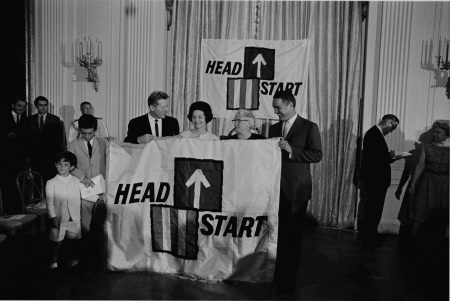 The following resources were shared by the Administration for Children and Families as we commemorate this historic anniversary:

Celebrating 50 Years Since the Launch of Head Start

Fifty years ago today, Head Start was launched in the Rose Garden of the White House. It is an anniversary we are proud to celebrate. Decades ago, we began developing the foundations for adults who are now the bedrocks of their communities. Today, we continue, learning, growing, and thriving.

The Office of Head Start (OHS) joins with the whole Head Start community in this celebration. We have assembled and digitized some of our shared history on the Early Childhood Learning and Knowledge Center (ECLKC):

On behalf of all children, families, staff, and communities we serve, thank you for continuing to help Head Start lead the way for early childhood education.

A recent community needs assessment conducted by the Institute for Child Success (which is leading the collaborative’s Childhood Homelessness Project) revealed gaps in services and the critical state of housing instability in Greenville County. In response, we are organizing a listening tour to understand community issues on the ground.