In our recently released South Carolina data book, we highlight a number of indicators related to family financial well-being. Reams of research find a connection between family economic well-being and a number of other factors in family life, including health, educational outcomes, housing stability, mental health and stress, and more.

Here’s a quick snapshot of what we found: 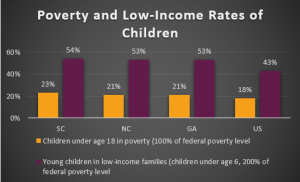 Why highlight both poverty rates for all children, and low income rates for young children? There’s two trends going on here, both of which have important implications for addressing and ameliorating the negative impacts of income insufficiency.

First, there’s a connection between child poverty rates and the age of the child. Families are more likely to be in poverty or living at a low income level when they have young children, due to a confluence of factors related to the parents’ circumstances. The younger the child is, the younger a parent (likely) is – which correlates with parents being earlier in their career or less likely to have financial resources which can ease their income situation, such as sufficient income to pay for child care and secure full-time work.

Secondly, there’s the difference in terms of how we define “poverty” and “low-income.” While federal poverty guidelines determine eligibility for various programs, they are generally an understatement of family economic situations. The poverty level was defined in 2017 as under $24,600 for a family of four. It’s a long story, involving cost-of-living estimates older than the grandparents of today’s children, but suffice it to say that the poverty estimates used nationwide do not accurately take into account booming housing costs, stagnated worker wages, and regional cost differences. Twice the poverty level is used as quick reference to give a broader view of family economics, and it is relatively close to the 185% FPL definition used for reduced price lunch in public schools.

Here in South Carolina, we can dig even deeper. The United Way Association of South Carolina calculates a family Self-Sufficiency Standard, a measure of income adequacy that looks beyond just the basics to determine the amount of income a family needs without assistance from public or private sources. A number of factors, including geography, family composition, and age of family members help shape a family’s economic needs. The Self-Sufficiency Standard considers  “the essentials” as well as child care and transportation. In all South Carolina counties, the Self-Sufficiency standard for a family of four (two adults, a preschooler, and an infant) well exceeds the poverty level; income needs range from 166 to 235% of FPL based on county. In Greenville County, a family of two adults and two children (a preschooler and an infant) would need to earn an hourly wage of $12.19 for each adult to live without income assistance; a single parent family with children of the same age would need to earn $21.25 per hour to meet this standard. 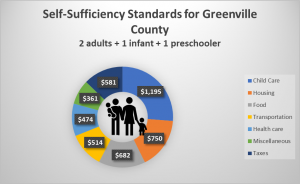 Note: This sample family receives $100 from the Child Care Tax Credit, $167 for Child Tax Credit, and $0 from the Earned Income Tax Credit. Combined with their other needs, this totals a monthly income need of $4,290. Source: Advancing the Common Good: Financial Stability for Working Families. The Self-Sufficiency Standard for South Carolina.

South Carolina has taken a number of steps to improve and support family economic self-sufficiency, with an eye towards improving life for children. In 2017, South Carolina implemented a nonrefundable state Earned Income Tax Credit (EITC), benefiting working families. The EITC is a powerful tool both for the working families using child care in South Carolina as well as many of the child care providers themselves. The federal EITC is a strong work incentive linked to increased family economic self-sufficiency; there is also a demonstrated link to improved health, economic, and social outcomes for families, as well as academic impacts for children.

Children can flourish in a range of environments, and income stability is no guarantee of child well-being. But given the link between economic sufficiency and positive childhood outcomes, it is essential for states to commit themselves to ensuring families can live, work, and thrive within their borders.